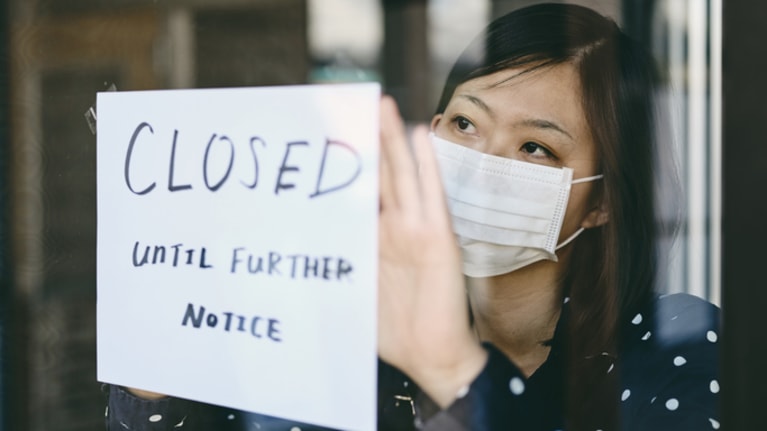 The economic devastation wrought by the coronavirus has finally shown its scale in the government's monthly reporting—U.S. employers cut 20.5 million jobs from mid-March to mid-April, while the nation's unemployment rate rose to 14.7 percent as much of the country shut down, according to the latest employment data from the Bureau of Labor Statistics (BLS).

The worst single-month employment report on record reveals how broad the damage is to the labor market, even as weekly first-time unemployment claims show millions more displaced workers have filed for benefits since the data was collected.

"Job losses of this scale are unprecedented," said Ahu Yildirmaz, an economist and co-head of the ADP Research Institute in Roseland, N.J. "The total number of job losses for the month of April alone was more than double the total jobs lost during the Great Recession."

April's unemployment rate spike from 4.4 percent in March is the largest single-month increase in history but short of the Great Depression high estimated at about 25 percent.

"The coronavirus has devastated the U.S. labor market, causing a shock historic in both its depth and breadth," said Nick Bunker, an economist at the Indeed Hiring Lab. "With today's report, the full scope and scale of the current labor market crisis is only now coming into focus. The job gains of the past decade have been wiped away, and no major industry was spared."

Heidi Shierholz, senior economist and director of policy at the Economic Policy Institute in Washington, D.C., said that despair is a reasonable response to the report. "Despair for the millions who've lost jobs, for their families, and for the immeasurable amount of lost potential."

The number of unemployed surged since mid-March by 15.9 million to over 23 million people.

"The unemployment rate tripled, but it would have been closer to 20 percent if workers counted as absent for 'other reasons' were instead counted as temporarily unemployed," said Josh Wright, chief economist at Wrightside Advisors, an economic research and consulting firm based in New York City. "Add in the historic increase in U6 underemployment which rose from 8.7 percent in March to 22.8 percent in April and you get a more accurate picture of the current situation."

Julia Pollak, a labor economist at online employment marketplace ZipRecruiter, said that over 5 million workers who would otherwise have been working full-time have been forced to work part-time for economic reasons. "Thousands of companies have converted salaried staff to hourly staff and capped their hours, in an effort to avoid insolvency," she said. "New job seekers have struggled to find permanent roles as the coronavirus crisis has caused the share of all job openings that are for temporary or part-time jobs to surge by 46 percent."

Experts agree that real unemployment is much higher than 14.7 percent for a variety of reasons, including that many workers are currently not willing or able to look for new jobs.

"The unemployment rate is not reflecting all coronavirus-related job losses because people are only counted as unemployed if they are actively seeking work, which is currently impossible for many," Shierholz said.

Adding the number of new unemployment insurance filings received after the data was collected for the latest BLS report, "one reaches an estimate of 26.5 million unemployed and an unemployment rate of 20.6 percent," Pollak said.

The majority of the job losses so far have been among women, setting this recession apart from the Great Recession, Pollak said. "There are two reasons for the disproportionate impact on female employment. The first is the industry composition of job losses. Far more men lost jobs during the Great Recession than women because the job losses were so concentrated in construction and manufacturing. This time, the crisis has caused large job losses in hospitals, schools, nail salons, clothing stores, child day care services, dentists' offices, and other establishments where women are vastly overrepresented in employment."

One significant reason for optimism is that 78 percent of unemployed workers report that they are only temporarily laid off and expect to be recalled to their job.

Those who said they lost their jobs temporarily surged to an unprecedented 18.1 million, with the remaining 2 million workers reporting permanent losses.

"Not all layoffs are the same," said Erica Groshen, a faculty member at the Cornell University School of Industrial and Labor Relations and the former commissioner of the BLS during the Obama administration. "One glimmer of hope in the otherwise scary labor market statistics is the high rate of temporary furloughs and the use of cut hours," she said. "If the past is a guide, these choices by employers may mean that a rapid recovery of jobs and earnings may be possible as COVID restrictions are lifted."

Groshen added that "the more that employers use furloughs rather than pink slips, the more likely we are to have a speedier, more productive and less stressful recovery."

She said that previously, most workers on temporary layoff have been recalled to their former jobs where they can be immediately productive, and employers are spared the uncertainties of getting the skilled workforce they need.

"For now, it's just hope," Bunker said. "Weekly unemployment insurance claims are still tracking in the millions, job postings on Indeed are nearly 40 percent lower than they were at this time last year, and, most importantly, the coronavirus is not yet under control. A cataclysm has hit the U.S. labor market, and the destruction is still ongoing."

As expected, employment in leisure and hospitality plummeted by 7.7 million, or 47 percent. Almost three-quarters of the lost jobs occurred in restaurants and bars (-5.5 million), but losses were also felt in the arts, entertainment and recreation sector (-1.3 million) and in hotels and motels (-839,000).

"The backdrop for manufacturers is very bleak, with collapsing global demand, ongoing supply chain disruptions, and high levels of uncertainty all posing very significant challenges," said Oren Klachkin, an economist at Oxford Economics in New York City. "We do not expect output losses to be recouped until 2021."

Increased Wages No Reason to Celebrate

"With millions of disproportionately low-wage workers losing their jobs, average wages jumping up like this is not good," Shierholz said. "It's not because people got big raises, it's because we dropped low-wage workers and many people who have hung on to their jobs are seeing their hours cut."