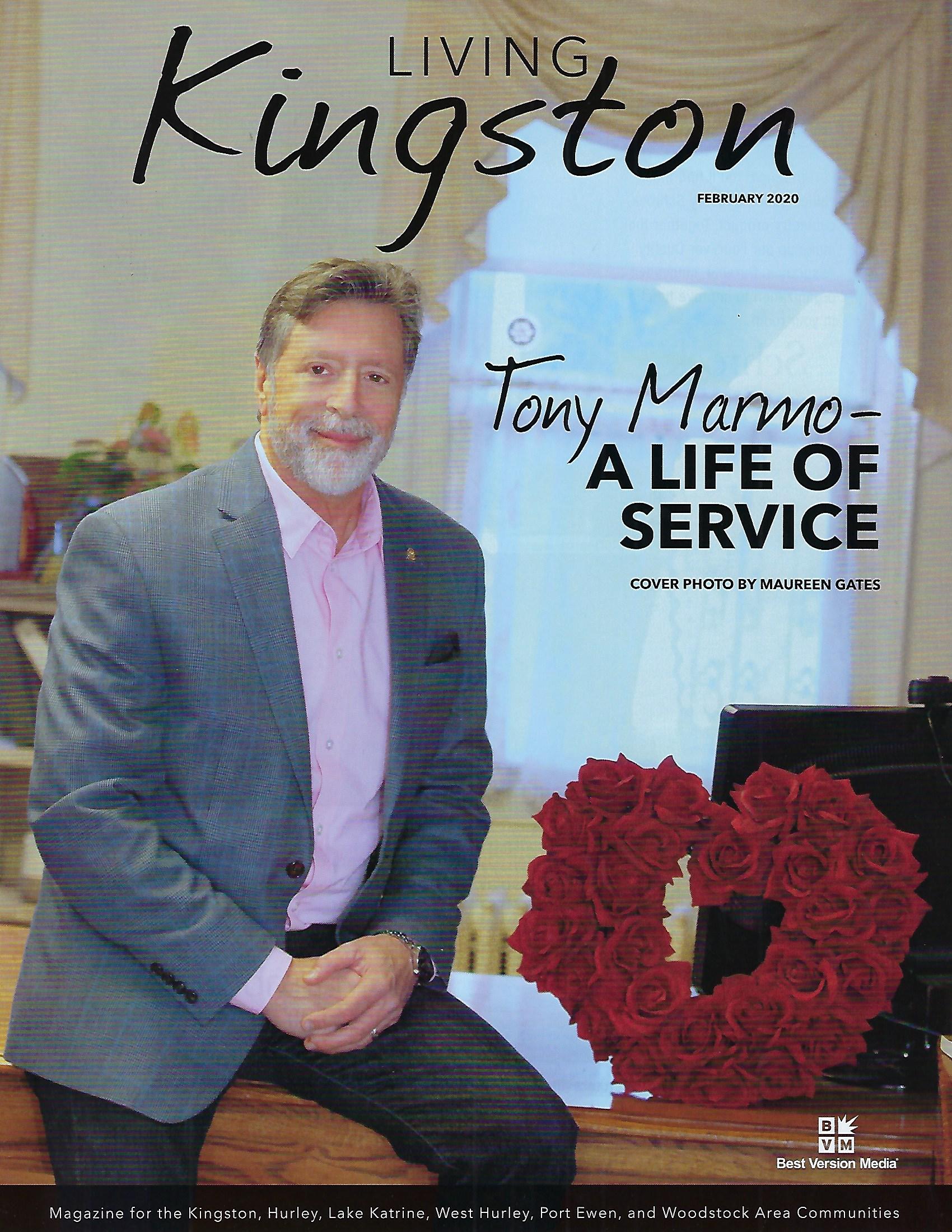 "If I were a billionaire, I'd be doing exactly what Bill Gates is doing, what [Warren]Buffett is doing, using my money to help people that are less fortunate ...that's what we're called to do."

The resume of charities and non-profits with which Tony Marmo is involved is staggering.While many of us donate money or time to one or two organizations, Tony's life is fueled by his altruistic dedication. His love affair with volunteerism began in 1987 when a colleague at Kingston Hospital encouraged him to join the Highland Rotary Club. Over the years he has been a board member for the American Heart Association, Alzheimer's Foundation, American Cancer Society, YMCA,Ulster County Regional Chamber of Commerce, Ulster County Workforce Investment Board, and Highland School Board. Although some memberships were professionally motivated, he, nonetheless, found his involvement to be rewarding."Professionally and personally, I've always thought it important to serve and to give back to others."

Born in Butterfield Hospital in Cold Spring, Tony grew up in Fishkill. The son of a rag dealer (a profession that no longer exists), Tony, who lost his mother at a nearly age, spent two years at Our Lady of Lourdes and two years at John Jay High School before getting his finance and accounting degree at Pace University. In 1977 he landed his first job as a staff accountant in St, Luke's Hospital, Newburgh, beginning a 37-year career in health care. He became personnel director at Kingston Hospital in 1980 and received his Master's degree from Long Island University five years later. He eventually moved into the position of CEO for the hospital, a post he held for nine years.

Tony left Kingston Hospital in 2003 and moved into the world of long-term care as a nursing home administrator, all the time continuing to volunteer whenever he could; however, the commuting to facilities in Albany, Troy, and Ridgewood, New Jersey limited the time he could give to others. In 2014, Tony had the opportunity to purchase Normann Staffing from Rob and Lorraine Normann. Coincidentally, he was familiar with the business when he was involved with the personnel department at Kingston Hospital. "It was a great opportunity to get into something I love, which is help people find jobs ... and it's allowed me to volunteer again because I have an excellent staff, and I can donate my time, money, energy to do some volunteer work." In addition, Tony encourages his staff to volunteer and gives them time off to do so if needed.

For more than three decades Tony has remained active in the Rotary Club; in fact, in July 2020,he will become District Governor, overseeing an eight-county region with 1,600 members and 55 clubs. "It's a great opportunity to get the message of service out to people that already get it; it's kind of like preaching to the choir on some level, but we always need new blood, new thoughts, new people."

Tony spoke about Rib Fest, the Highland Rotary Club's primary annual fundraiser. "We raise upwards of fifty thousand dollars a year, and that fuels our program --- our scholarships, our food drives, our clothing drives; everything we do emanates from Rib Fest."

His involvement with Rotary has also taken Tony out of the country a few times for  humanitarian missions to Cap-Haitien, Haiti,which is located in the northern part of the country, about a five hour drive from the capital of Port-au-Prince. He worked to deliver clean water and first aid training to the area in conjunction with the local hospital. "It made me realize how blessed we are in this country and how much we take for granted... how much abundance we have and how little they have." Tony realistically spoke of his impact on the poor healthcare and educational systems in Haiti. "I'm not naive enough to think that we can fix everything, but if we can help 5,000 people or 10,000 people or whatever we can help, that's what we're supposed to do --- not that we need to turn our backs in the least on any local issues, problems, or concerns."

Tony's infectious optimism led him to Kingston Community Radio in 2002 with a bi-weekly show titled "Feel Good Friday," a program which eschewed the negativity in the world. "We're only talking about good stuff, so if you have anything bad to say, don't call." Tony emphasized the importance of spreading good news about your community, your church, your kids, your family. He has since moved to another program --- "Thunder Thursday,"a talk-format show which he hosts with Scott Herrington. Kingston Community Radio, which broadcasts 7-9 each morning on 92.5 FM and 920 AM, has been a perfect outlet for Tony's dynamic nature. "My personality is very much upbeat; I'm not a shy guy, and it has served me well ... I love being on the radio."

One year, when he was attending Hooley on The Hudson Irish Festival, Tony wondered why there wasn't an Italian cultural organization and festival in Kingston, since the 35,000 Italian Americans comprise the largest ethnic group in Ulster County.So, toward that end, in March 2015, he held a meeting on the second floor of Frank Guido's Little Italy restaurant and invited anyone who was interested in creating an Italian organization. 22 people attended the first meeting, and a teach subsequent monthly meeting attendance grew substantially; the Ulster County Italian American Foundation now boasts around 350 members. The Italian Festival has been held on the day before Columbus Day for the past four years; the proceeds from the event fund the organizations scholarship programs."We've given out almost fifty thousand dollars in these four years, which is pretty remarkable. It really is one of my proudest accomplishments in terms of giving back to the community and serving."

While he is president of the Ulster County Italian American Foundation, Tony does not speak Italian, a fact he laments; but his Italian lineage is evident. His paternal grandfather immigrated from Italy in 1905, but his paternal grandmother was born in the United States; still their marriage had been arranged in Italy. The bride's parents were worried that his grandfather would not show up for the wedding, so his brother had to accompany him. Both maternal grandparents were born in Italy. "My grandpa came to live with us, and my dad and he spoke Italian, but they didn't pass it on; it's really unfortunate because in Italian when you lose the language, you lose the culture."  Tutto Italiano is not broadcast in Italian; in fact, Tony estimates that only a dozen members out of the 350 are actually fluent in the mother tongue. "It's scary because for my generation it was never part of the expectation ... and I think that's part of the reason we put the organization together, to try to sustain traditions."

This past October, Tony received the Len Cane Heart of Ulster County Award from the Ulster County Regional Chamber of Commerce for his commitment to serving his community."I love being in business in Ulster County ... we respectfully deal with diversity or differences of opinion ... and are willing to work for the greater common good. Doing business in Ulster County is great." And he enjoys the entire region and specifically likes having his office in on Clinton Avenue in Kingston. "I love the whole Uptown; I'm a big local shopper fan. The historic value and presence we have generally in the Hudson Valley is great ...there's plenty of free and open space ... and I love the fact that we have four different seasons."

Awed by his service to others, I was curious about how Tony Marmo relaxes. Claiming his name and "relaxation" to be nearly an oxymoron, he stated, "I love to be outside." Although he had to give up bat and ball sports after he popped his Achilles tendon in 2015, Tony does enjoy golf, dining at area restaurants, a glass of bourbon, and a good cigar. With a surname that translates as "marble" or "stone," Tony coincidentally or hereditarily enjoys "taking care of the yard, building walls, re-doing concrete patios. Marmos were stone workers somewhere in prehistoric roots." He's also a self-proclaimed "handyman," who likes to do minor plumbing, carpentry, electrical stuff in the office and at home. "I am not an expert by far, but I know enough to be dangerous."

Having just joined the Occupy Peace Board in Kingston, Tony still finds time to root for New York sports teams. He's been a Yankees fan since his father met Babe Ruth,stating "I had no option other than being a Yankees fan." Although he specifically roots for the Giants, Rangers, and Knicks, Tony likes all the New York teams. "I'm a sports guy." A one-time expert skier, Tony loves the easy access to Belleayre, Windham, and Hunter Mountains. "Skiing was a passion of mine ... it used to make the winters go by faster ... not that I wouldn't mind going down to warmer weather and watching some exhibition baseball."

Fortunately for our community, Tony Marmo has resisted any urge to relocate down South. We are fortunate to have such a dedicated individual in our midst trying to improve the lives of many others.