Jobs after coronavirus: The US labor market won't bounce right back 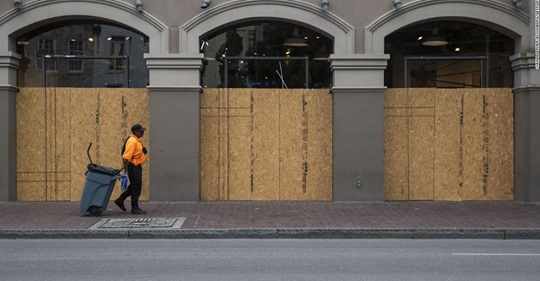 New York (CNN Business)The US labor market was in its best shape in nearly 50 years. Then the coronavirus pandemic swept across the country, taking millions of American jobs with it.

It will take the labor market time to recover, but it's unclear exactly how long.

The leisure, travel and hospitality industries have been hardest hit, but shutdowns have extended far into other sectors, such as manufacturing.

The March jobs report -- which doesn't take the most recent tide of joblessness into account -- showed the unemployment rate ticked up to 4.4% from a near 50-year low of 3.5% and could reach double digits in April. Economists at America's big banks estimate peak coronavirus-related unemployment to hit 15% or more. JPMorgan's economists are forecasting a peak as high as 20%.

While the US economy is likely in a recession already, experts expect the downturn will be as short as it will be deep.

Once the virus is defeated and social distancing policies let up, the economy will bounce back -- at least that is the hope.

For employment, that could mean a rapid rebound as well -- for some. But not all jobs will magically reappear at once.

When factories resume their regular output, and bars, restaurants and movie theaters finally reopen, many of the jobs that temporarily disappeared are expected to come back.

But this rebound may come at a slower pace than the initial downturn, Aaron Anderson, senior vice president of research at Fisher Investments, told CNN Business.

"Some economic activity has been lost, so companies might not hire back at the same speed," he added.

Some businesses, particularly smaller ones that are more vulnerable to economic shocks, might fold under the sudden recession, eliminating the jobs they provided jobs altogether. Larger companies, meanwhile, may need to cut costs when they emerge from the crisis, said Simona Mocuta, senior economist at State Street Global Advisors.

"My view is that unemployment will spike, come back, but then take some time to heal," Mocuta said. "If we make a full recovery, it's more likely next year than this year."

"We expect the unemployment rate to peak in the second quarter, and gradually climb down in subsequent months with a gradual resumption of normal economic activity," said analysts at the ratings agency on Monday.

Changing the world as we knew it

Economists also believe that the coronavirus outbreak and subsequent sheltering in place orders are exacerbating trends that were already unfolding, including the transition to shopping online rather than in stores.

Some brick-and-mortar retail jobs might never come back, said Mocuta, which in turn could affect the commercial real estate market.

Just as the economy will take some time to recover, so will consumer confidence. After weeks or months of social distancing, it might take time for Americans to eat out at restaurants and make travel plans again.

The outbreak also shone a light on America's benefits, including paid sick leave.

Companies might adopt more worker-friendly benefit policies to protect their employees in case of another outbreak. But this would increase the cost per employee, and might make businesses more hesitant to hire.

On factory floors, where workers are already increasingly competing with robots that never take sick leave, some jobs are expected to disappear altogether over the next decades, as workers are being replaced with machines. Last year, Oxford Economics forecasted that 20 million global manufacturing jobs will be displaced by robots until 2030.

The pandemic could speed up this development further.